RANCAGUA, CHILE. A top-of-the-line cone crusher solution is helping Codelco keep up with demanding processing volumes at the world’s largest underground copper mine. 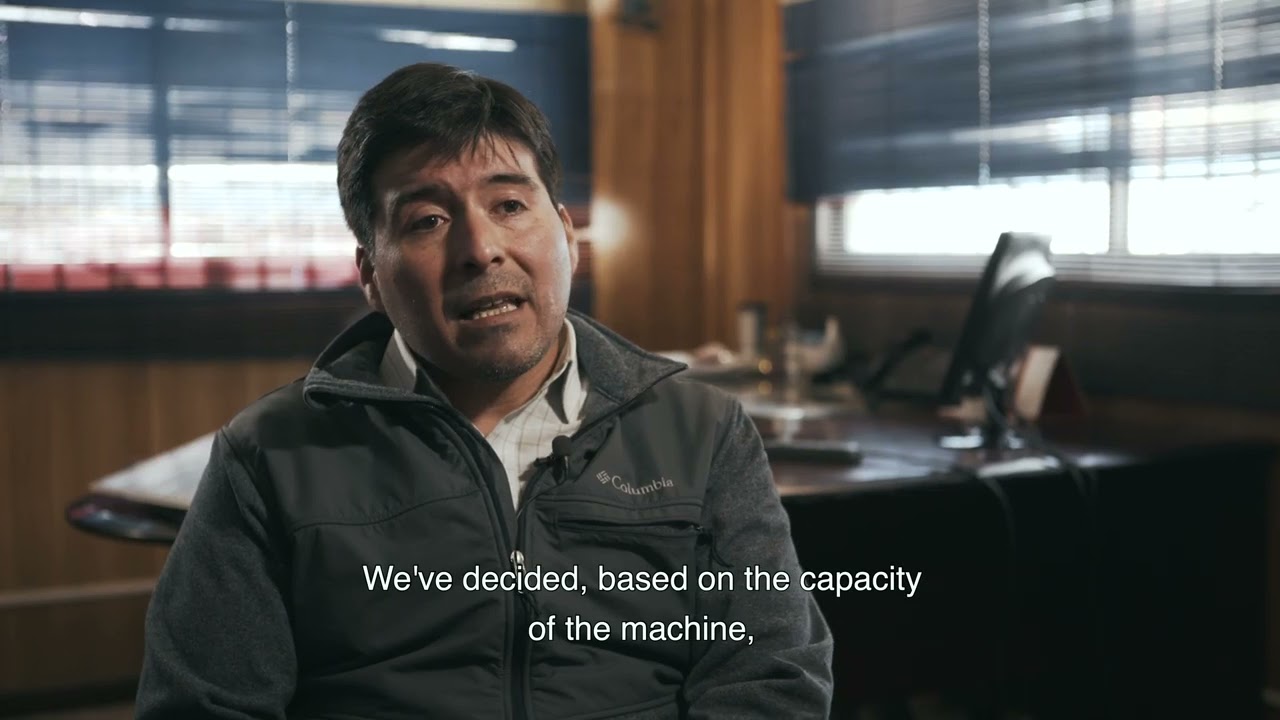 Majestic views abound at El Teniente, a sprawling operation 2,400 metres above sea level in the Andes mountain range. Not only is El Teniente (“the lieutenant” in Spanish) Codelco’s largest operation, it remains the biggest underground copper mine in the world. The Chilean state-owned copper giant is investing 5.4 billion USD in a project to develop a new mine level that figures to extend mine life by more than 50 years once complete in 2025. The expansion is part of a 10-year, 40-billion-dollar overhaul through 2027 to extend life of core mines and enable Codelco to maintain production rates over the coming decades, despite declining ore grades and rising costs. El Teniente produces around 450,000 tonnes of fine copper annually, processing as many as 50 million tonnes of rock to extract the low-grade copper.

Codelco, the National Copper Corporation of Chile, is the world’s largest copper producer and second largest molybdenum producer. The Chilean state-owned company operates eight mining divisions: El Teniente, Chuquicamata, Radomiro Tomic, Ministro Hales, Gabriela Mistral, Salvador, Andina and the Ventanas smelter and refinery. Founded in 1976 and headquartered in Santiago, Codelco owns around 10 percent of the world’s copper reserves and is responsible for about 11 percent of global annual copper output. The company produced approximately 1.677 million tonnes of copper in 2018 and plans to grow production to 1.73 million tonnes in 2019.

In the early 2000s, El Teniente installed Sandvik H8800 crushers in secondary, tertiary and pebble applications to help keep up with production increases that strained the mine’s plants. After 12 years of productive operation and more than 80 crushing chamber liner changes, the mine sought a replacement solution for its aging crushers, which kept maintenance planning superintendent Hugo Olmos and his teams busy. “The reliability of the machines was creating a bottleneck in the tertiary plant, thus increasing our circulating load,” says Olmos, who started at El Teniente as head of the electric and instrumentation unit in 2008. “The older components had significantly deteriorated. That means less control, which means less processing. It meant a decrease in general productivity.” Olmos says there were only two options: reduce comminution or change the crushers. “What Sandvik offers as overhaul to change the main components of a Sandvik H8800 is the Sandvik CH895 model,” he says. “We changed the big components, bottom shell, top shell, main shaft.” Sebastián Sáez Araya, the chief plant planning engineer for secondary and tertiary crushing, says availability and reliability were the most important criteria. “Our number one mission is to never stop the production, and never limit the product that comes from the previous stage, the mine,” Sáez says. “Different strategies we followed were successful, one of them being the implementation of the CH895.”

A fully-loaded Sandvik CH895 with an optimized crushing chamber solution, electric dump valve system and a rotating feed distributor was installed for a six-month trial in a pebble application. The optimized crushing chamber – a premium HR/A solution instead of the standard EEF/EF chamber – included changing crusher settings such as the eccentric throw to match El Teniente’s needs. The premium solution increased size reduction by 20 percent during the trial. To help ensure optimal crushing chamber performance and eliminate any potential feed issues, Sandvik also installed a rotating feed distributor above the feed hopper to evenly spread incoming material. While the older Sandvik H8800 crushers showed indications of linear ovality – an indication of uneven feeding – there were no such signs in the new Sandvik CH895. Ensuring an even distribution maximized crushing chamber life. El Teniente experienced a reduction in circulating load and power draw due to the upgrade. “The rotating feed distributor was also one of the main factors when improving the performance of the machine, regarding the durability of the liners and the quality of the final product,” Sáez says.

The older Sandvik H8800 crushers provided a P80 final product that was 55-60 percent less than ½ inch. Sandvik CH895 delivered a P80 70 percent less than ½ inch, with less circulating load and higher net capacity. “The structure of Sandvik CH895 is stronger, from the bottom to the top, including the spider cap,” Olmos says. “The lubrication flow is better, so the machine is more reliable. The performance is better and the durability, too. The strengthening of the machine provides a better crushing force. The intensity is higher when it comes to crushing the rock. That improves our reduction ratio.”

El Teniente is the world’s largest underground copper mine. Located 90 kilometres south of Chilean capital Santiago in the Andes mountain range, the mine produces around 450,000 tonnes of copper annually. More than 3,000 kilometres of underground drifts have been developed since El Teniente started operation in 1907. A new mine level that will extend mine life by more than 50 years is set to open in 2025.

El Teniente purchased the trial Sandvik CH895 and subsequently ordered two additional Sandvik CH895 upgraded units to replace other Sandvik H8800 crushers in the tertiary plant. “Sandvik CH895 met our KPIs for performance and availability,” Olmos says. “The electric dump valve helped us detect uncrushable material. Efficiency and reduction rates improved and availability increased.” All three Sandvik CH895s are now in round-the-clock operation. “Efficiency, efficacy, and productivity are most important,” he says. “We want the crushers to work productively and reliably and produce a predictable quality of product. It is a key part of the circuit, so it has to be in continuous use. What I see is that the machines are working flawlessly. And we’ve tried it with different eccentric throws. The machine improves production to an extent. But regarding efficacy and efficiency, we’re capturing all its value. We use the machine over 85% of the time. Or higher. Around 87%, 87.8% of use. We had never reached this number before. For me, that’s the greatest benefit.” El Teniente has also been able to extend crushing chamber liner lifetime. 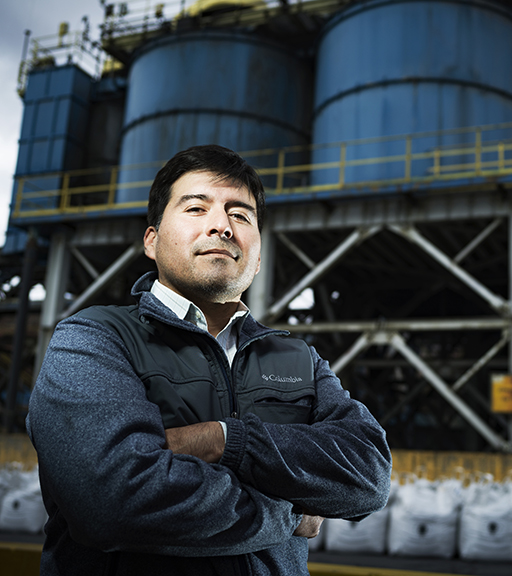 “We’ve decided, based on the capacity of the machine, of the cone, the Hydroset, to increase the hours of use to more than 1,200 hours, because of the new crushing chamber liners,” Olmos says. “We went from 1,200 hours to 1,345 hours, even 1,350 hours. “What does that mean? The cycle is longer and the cost is reduced. The mean time to repair the machines has decreased. That means the job of repairing the crushers is easier for me.” Olmos calculates that each Sandvik CH895 will have paid for itself after six years of operation, based on the difference in maintenance costs compared to the older crushers. “Sandvik is a good option for crushers,” he says. “They currently have machines that are able to crush tertiary or even quaternary rock. They’ve already showed good performance with secondary rock. They are good in terms of maintainability. That means it’s easier to carry out maintenance on the machines. Their components are simple.”

When issues do arise, Sandvik technical specialists working on site help El Teniente resolve them promptly. “We work shoulder to shoulder with Sandvik every week,” Sáez says. “What I like the most about Sandvik helping us is their presence. If we have a problem, they are here. Sandvik has helped us solve any problems we’ve encountered. It’s a huge relief, because sometimes we come across difficulties we can’t solve ourselves. That’s what stands out about Sandvik. They are permanently here, and that’s what we need.” El Teniente’s first Sandvik CH895 has been in operation for three years in the pebble application, while the two newer units are approaching a year old and each is still on its second liner. “We’ve seen that the performance exceeded our expectations, and we believe it can be even better,” Sáez says. “We have clearly exceeded the hourly production; that is, we are producing more per hour than what was agreed at the beginning of the project. I think we haven’t yet reached the best performance we can get.” Adds Olmos: “When someone asks for performance, no other can offer more than the CH895. The result with the CH895 is positive in El Teniente, so I would have no problem recommending it for similar applications.”