You are here: Home Crushology … Screening solutions The art of screening Screening terminology

Your guide to screening terminology

Throughout the Knowledge Hub we’ve been exploring mechanical screening and explaining its terminology as it arises. To keep on top of things, now is a good time to sum up these terms and provide a place where you can find definitions for the technical language involved in screening.

This glossary should help you grasp the terminology used throughout the Knowledge Hub and help you understand more about the principles of mechanical screening.

The thickness of the material on a screen deck during operation.

This occurs when screening is restricted by material stuck to the screen surface, typically caused by moisture.

The maximum amount of material that can be inside the screen at any given time without impacting on screening performance.

A bar running the length of the screen that keeps the screening material firmly in place. If a central hold-down bar is used, the deck will have a double-crown, with the bar running along the valley between the two crowns.

Clamping bar (or Side rail)

These are fastened onto the inside of the side plates to hold the screening media firmly in place and maintain the correct tension.

These terms refer to crushing and screening operations. In a closed circuit, oversize material from the screen is fed into a crusher then conveyed back into that screen. This process repeats until all oversize material is crushed and has passed through the screen as throughput. In an open circuit, screened material may move on to further processing but does not re-enter the same screen.

A bar that connects the side plates and strengthens the screen. These are typically made of steel as the vibrations of the screen can put them under significant strain.

These sit across the decks and slow the flow of material. This can be especially useful when there is too little material on the deck (ie. when there is a low material bed). They increase the time it takes for the material to pass over the deck, reduce bouncing, increase probability, and reduce undersize in overflow. In wet screening they can help ensure that material is washed adequately.

An angled piece of metal that sits at the end of the screen, to direct the overflow (typically into chutes) as it exits.

To be precise, the deck is the frame which holds the screening media in place. However, it’s often used to mean the entire surface that blocks larger particles and allows smaller particles to fall through. There can be several decks inside the screening machine.

This sits at the feed end of the screen, receiving the material from the conveyor or chute and evenly distributing it into the screen.

The relative size distribution of particles in the material that is fed to / discharged from the screen.

The force of acceleration acting on a screen.

The gradient or angle of the deck to the horizontal.

In screening, motion refers to the screen being vibrated to encourage stratification and separation (such as circular, linear or elliptical motion).

This describes screens where the gradient changes as the the material passes through the screen (almost always from a steeper to a shallower gradient). An alternative to a one-slope screen. Multi-slope screens can often provide increased capacity and efficiency, especially for fines.

Material that passes over the decks in a screen and exits at the discharge end (see image below). 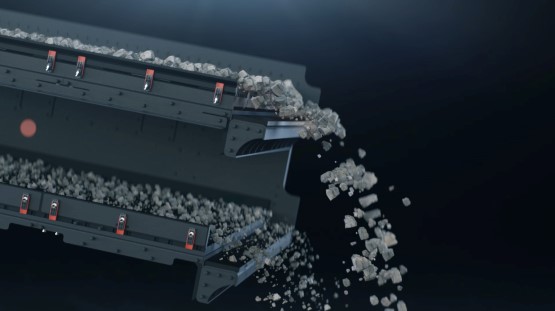 Material in the underflow with a particle size greater than the separation size.

The geometry of the particles that are being screened (round or cubical, for example).

This occurs when screening is restricted by stones getting wedged in the holes on the screen media.

The mechanical process of separating particles according to size.

The process of using a screen (a surface with holes or apertures) to remove particles of less than a certain size from a mass of mixed particles.

The vertical plates that make up the body of the screen, standing on either side of the screen and connected by the decks.

Wet screening can often increase screen capacity, but it is expensive and water is a limited resource in many locations, so it is only used when necessary. Spray bars have polyurethane nozzles that distribute water onto the material bed.

The process by which fine particles in a mass moves to the bottom of the material bed, prompted by a combination of gravity and vibration (see image below).

These are flat bars or profiles that that sit underneath the screening media, to support it and hold it in place. They are typically made from steel.

The distance which the screen moves during its operation (that is, the extent of its displacement when in motion).

Material that passes through all the decks in a screen.

The amount of material that can pass through a screen of a stated area for a stated time (typically measured in tons per hour per m2).

Material that passes through a deck in a screen.

Material in the overflow with a particle size less than the separation on the deck, which should have passed through the screen deck.